How to Read Your Ticket 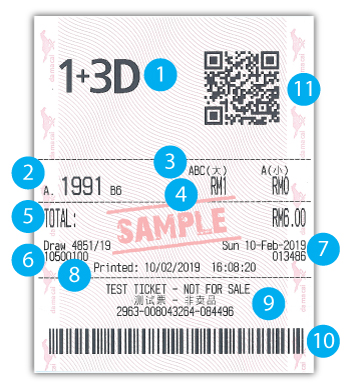 All winning tickets are only valid for claim within a period of 3 months from the date of the draw and they must satisfy the following requirements:

Please note that tickets should be kept away from heat, direct sunlight, water, oil and corrosive solvents.

When are the draws conducted?

Da Ma Cai draws are conducted every Wednesday, Saturday and Sunday at 7.00pm. In addition to these three standard draws a week, the Ministry of Finance (MOF) may from time to time grant the Company approval to conduct Special Draws, which are usually held on Tuesday at 7.00pm.

Where are the draws conducted?

The draws may be conducted at any location as may be determined by the Company from time to time, including the following locations:

How are the draws conducted?

Da Ma Cai draws are conducted by our Company officials together with guest officials, external auditors and public witnesses.

The entire 6-digit numbers drawn are the winning numbers for the 3+3D Bonus Game. The three main numbers of the 3+3D Bonus Game each contains a Bonus Zodiac, to be determined by drawing from the Bonus Drum marked with "B". The drum contains 12 balls, that corresponds to the twelve Chinese Zodiac of  “Rat”, “Ox”, “Tiger”, “Rabbit”, “Dragon”, “Snake”, “Horse”, “Goat”, “Monkey”, “Rooster”, “Dog” and “Boar”. Each ball are marked in Chinese and English word for the respective Chinese Zodiac. The Bonus Zodiac drawn will determine the winner(s) for the Bonus Prize Money for the 1st Prize, 2nd Prize and 3rd Prize category of the 3+3D Bonus Game respectively.