A businessman from Selangor has come forward to claim his winnings of RM25.75 million, the biggest share of the Da Ma Cai 1+3D Jackpot 1 drawn on Saturday, 19 May 2018. Meanwhile, a retiree from Johor who bought the same set of number 9363 + 1824 on a House Share System Bet (HSSB 10) ticket took home the remaining share of RM2.86 million.

When claiming the prize, the lucky Johorean told that he actually missed out winning another Da Ma Cai game, the 3+3D Bonus on the same draw day.

3+3D Bonus has the highest payout

“I should have listened to the sales operator at the counter who asked me to try out the new 3+3D Bonus game. She told me that I just need to add my age or birth year to my usual 4-digit numbers, to form the 6-digit numbers combination. As for the bonus, it can be just my own Chinese Zodiac.”

Da Ma Cai spokesperson told that this 3+3D Bonus is a new game offered by Da Ma Cai. The game has the highest prize payout of RM120,000. This game is the first of its kind in Malaysia and in the region, as it also carries the Bonus element symbolized by a Chinese Zodiac. The game is design to offer the customers with 3 Bonus winning chance. The game also has the highest number of winning prizes, totaling 45,977 prizes. It is easy to play the game as one just need to form a 6-digit numbers combination with a Bonus Chinese Zodiac.

To add excitement, a Special Bonus of RM1.5 million will be added to the 3+3D Bonus draw on Sunday, 27 May 2018. The additional bonus will be distributed equally to each of the 3 main Bonus Prizes.

The winners told Da Ma Cai that the first thing they had to do is to contribute some of their fortune to homes for the elderly and orphanage. 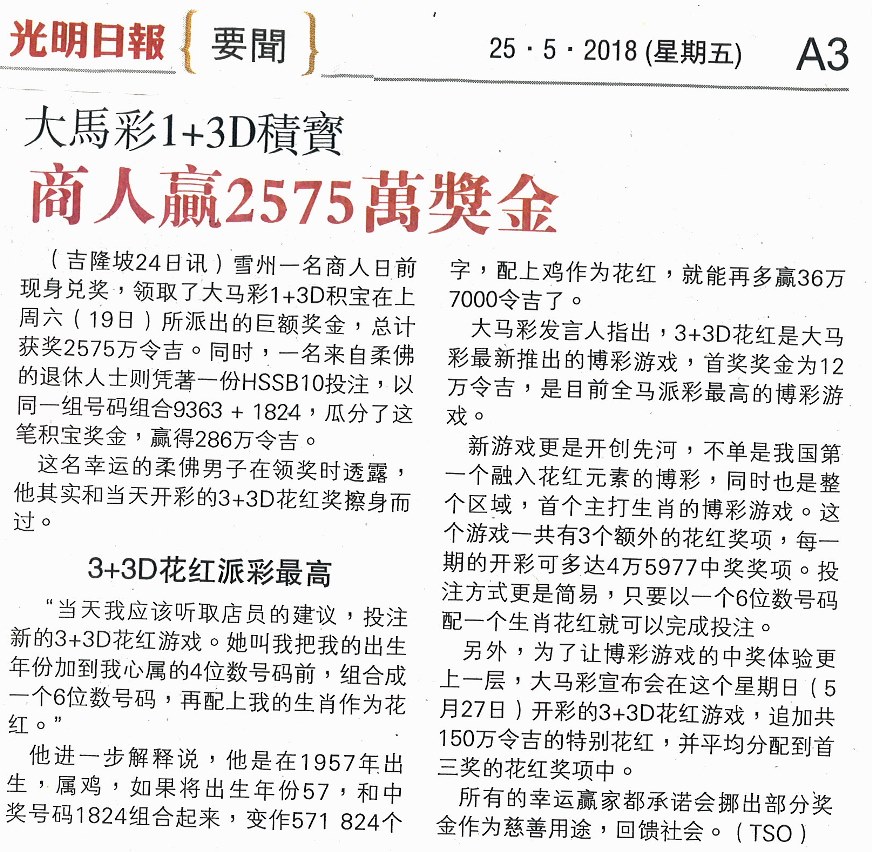