A day earlier on 1 April, another 2 lucky winners won the partial jackpot with the purchase of a HSSB 20 Lucky Pick ticket where they took home RM1,248,610.50 each.

The winners are from different States; Penang, Perak, Pahang, Negeri Sembilan, Melaka and Johor. Among the newly created millionaires, two were under the age of 30.

The 27 year-old winner, the youngest amongst the lucky winners said that he was out with his family members for lunch on that day after paying homage to my ancestors in conjunction with Qing Ming and stopped by a Da Ma Cai outlet to buy numbers.

“I bought a HSSB ticket displayed at the counter because I was hoping that my ancestors might just bring us luck.”

Another 29 year-old winner said that it was his third time buying HSSB.

Both young winners said that they will share their windfall prize with their family members, and will also donate some to charity.

Da Ma Cai spokesperson said that customers usually buy a System Bet with 10 or more sets of 4-digit numbers to increase their chances of winning the 1+3D Jackpot. A System Bet 10 ticket with 10 sets of numbers cost RM90, but for those who could not afford, the HSSB is an option that allows customers to buy a share of the 10 sets of numbers with just a fraction of the full bet amount.

“In the case of these 9 lucky winners, they had paid a fraction of only RM10 for the HSSB 10 Lucky Pick ticket each, covering 10 sets of numbers instead of paying the full RM90 to cover all possible pairing combinations.”

A day earlier on 1 April, another 2 lucky winners took home the partial jackpot with the purchase of a HSSB 20 Lucky Pick ticket.

Da Ma Cai is a brand of Pan Malaysian Pools Sdn. Bhd. (“PMP”), Malaysia’s authorized numbers forecast operator. On an annual basis, Da Ma Cai actively supports various causes in the areas of education, social welfare and public health. Following the acquisition of PMP by Jana Pendidikan Malaysia Sdn. Bhd. (“JPM”), all of PMP’s net dividends that JPM receives are donated to The Community Chest. With this structure, Da Ma Cai has effectively been transformed from a for-profit organization into a social business, providing long term donations to The Community Chest for the benefit of the Malaysian community. 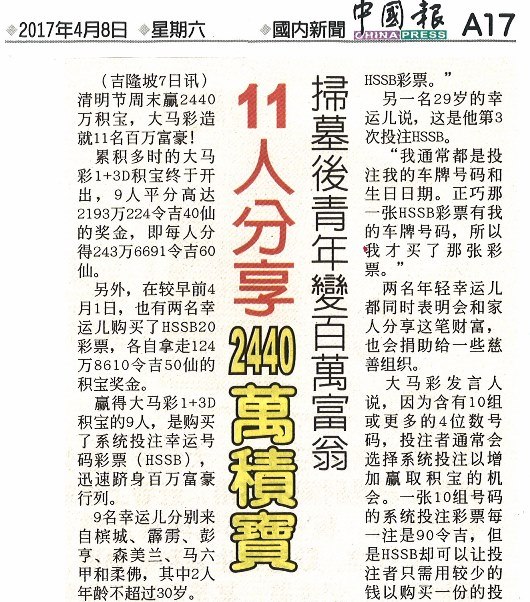